BAGENALSTOWN showjumper Jason Foley is certainly feeling on top of the world this morning after a magnificent victory at the World Breeding Championship for Young Horses in Lanaken, Belgium at the weekend.

The 18-year-old from Ballyloughan claimed gold thanks to a double clear round which saw him just hold off another fine young local horseman – Mikey Pender from Castledermot – who brought home the silver medal. 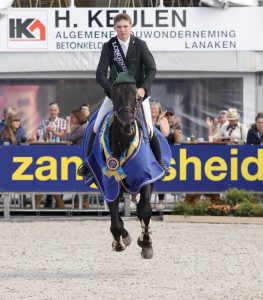 The win was all the more special for Foley as he suffered a bad shoulder injury just three weeks ago. However he bravely fought back to compete for honours.

“I dislocated my shoulder three weeks ago in a fall,” Foley said. “I didn’t actually think that I could make it here, so I hope the hospital doesn’t see this, but I thought, let’s try it and I was lucky that it went OK!”

Foley was aboard Rockwell RC in the final for five-year-old horses and was one of 11 combinations to jump clear in the opening round.

In a thrilling jump-off Foley went clear again in 37.72 seconds, just under half a second ahead of Pender and Chacco Bay in the runner-up spot.

It was Pender’s second silver medal of the games after he was also runner with MHS Cardenta in the six-year-old final.

Podium finishes are nothing new for Foley who was crowned European under-18 champion in France last year.