Myshall make it 20 in a row

MYSHALL’S ability to fashion goals was the major reason why the ladies in black and amber claimed an incredible 20th successive Carlow senior camogie championship at IT Carlow on Saturday evening.

They sealed a merited five-point win over a Mount Leinster Rangers side which staged a commendable second-half rally which cut the leeway to two points with four minutes remaining.

The game was highlighed by the scoring feats of two Myshall players: corner forward Ciara Quirke and wing forward Emma Coogan, both of whom finished with a tally of 2-4. All of Coogan’s scores came from open play. For Rangers, their wing forward Ciara Kavanagh had a memorable game, scoring 1-8.

The game’s two number 12s, Emma Coogan and Ciara Kavanagh, traded the game’s two opening points before the Rangers player put the challengers in front for the only time on 13 minutes with a pointed free. 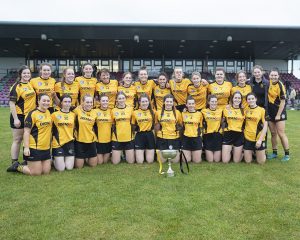 The Myshall team with the cup after winning their 20th Carlow senior camogie championship in a row at IT Carlow on Saturday Photos: Thomas Nolan Photography

It was apparent from the early stages that the quality of the Myshall forwards was proving a handful for the Rangers defence. In particular the pace of Ciara Quirke, allied to her hurling skills, along with the scoring ability of Emma Coogan. This was supplemented by the hard graft of Ali Ruschitzko and Olivia Jordan.

In midfield Áine Behan was having a big influence, well assisted by Tara Bermingham. Further back Breege Nolan was a powerful presence up to her dismissal on 51 minutes following a second yellow card.

Leanne Nolan at corner back also caught the eye with her commanding play while their tall wing back Tara Wilson had a very steady game all through.

The game turned Myshall’s way on 14 minutes when they were awarded a penalty which Ciara Quirke promptly crashed low to the net. Rangers responded with a neat point when centre forward Eimear Byrne picked out right-half forward Anna Breen.

A Ciara Quirke point from play was followed on 20 minutes by a second goal for the champions. This time it was Quirke, cutting across the Rangers square, who unleashed a terrific drive which gave Rangers goalie Niamh Doyle no earthly chance.

It was 3-2 to 0-4 on 25 minutes before Myshall swooped for a third goal of the half, this time Emma Coogan finding the Rangers net.

At half time Myshall led 3-3 to 0-6, six scores apiece, but with those Myshall goals the big difference.

A pointed free from Quirke early in the second half was quickly followed in the 34th minute by a fourth Myshall goal: Emma Coogan stretching the lead to 10 points. The game looked done and dusted at that stage.

But Rangers had other ideas. On 46 minutes a long-distance free from Ciara Kavanagh was sent to the Myshall net by Rangers substitute Emma Kelly. And when Ciara Kavanagh’s speculative shot deceived Myshall goalie Sarah Jane Doran on 55 minutes the score was 4-7 to 2-9, with the champions down to 14 players. A brace of Rangers points from Rachel Breen and Ciara Kavanagh (free) cut the arrears to a mere two points and there was a hint of a sensational result.

But Myshall regrouped and hit the final three points – a fine, steadying effort from play by Olivia Jordan was followed by a free from Ciara Quirke when Emma Coogan was fouled en route to goal. Coogan herself had the last scoring say in the game with a neat point from play.

So Myshall defended their county senior title successfully once again and in winning 20 successive championships they have created what must stand as a national record.

If Ciara Quirke, the game’s outstanding performer, and Emma Coogan stole the scoring honours for the winners, then the fact that Ali Ruschitzko and Olivia Jordan made the scoresheet was deserved for their contributions.