A St Mullins goal in injury time from their full forward and captain Áine O’Carroll decided this junior camogie championship final in favour of the ladies from the deep south, in a cracking decider against an excellent Muinebheag side at the IT Carlow grounds on Saturday evening.

With the sides tied (2-6 to 1-9), it was anyone’s game. And it was the ‘saints’ skipper who held her composure to take a shot from outside the Muinebheag square which dipped under the crossbar and found the top corner of the net.

The starting time for the game was delayed by 15 minutes as the autumn sunshine gave way to an absolute downpour half an hour before the scheduled starting time – the rain being accompanied by thunder and lightning. 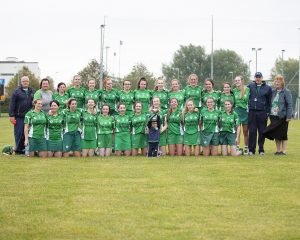 The St Mullins team with the cup after winning Saturday’s junior championship final at IT Carlow Photo: Thomas Nolan Photography

But the conditions could not deflect from an excellent game, which produced a high level of skill from both sides.

The teams were level on three times during the opening half and six times in all, which provides an indication of how little there was to choose between the sides.

St Mullins had the better of the early play, Áine O’Carroll opening the scoring with a pointed free on five minutes, which was quickly nullified by a point from play by midfielder Emma Lillis.

Muinebheag had edged 0-5 to 0-3 in front by the 20th minute but then St Mullins went back in front when their centre forward Michelle Boland made headway along the Muinebheag left wing of defence and shot to the net.

Still Muinebheag held a 0-7 to 1-3 interval lead, the impressive Emma Byrne pointing an injury time point from a free for the Bagenalstown ladies.

The second half saw St Mullins in early charge and they made their control count when left half forward Kate Doyle rattled the Muinebheag net in the 33rd minute, followed immediately by an Áine O’Carroll pointed free. It was now 2-4 to 0-7 in favour of the saints who went further ahead on 43 minutes with a point from their captain.

It took Muinebheag 20 minutes to raise a second-half flag. But it was a goal which breathed new life into the game. Ali Cushen, the outstanding Eve Sinnott and Ruth Gardiner combined for the latter to crash home her side’s goal.

Ali Cushen immediately added a neat point and the sides were tied.

Excitement ran high in the final stages of the game. St Mullins brought up their goalie Mary Coady to point them in front from a 55th minute free but a great point from play by Emma Byrne brought Muinebheag back level three minutes later.

The game looked destined for extra time until Áine O’Carroll struck for the game’s winning goal.

Following the game the St Mullins captain was presented with the Paddy Foley Memorial Cup.