Sun shines at Break for the Border

HUNDREDS of people turned out for the Break for the Border – Carlow to Wicklow 10km & 5km in aid of St Joseph’s NS, Hacketstown.

The annual fundraiser raised over €6,500 for the local school. Participants of all ages ran, walked and jogged from Hacketstown towards Tinahely, breaking the Carlow-Wicklow border along the way.

The morning of the race was a hive of activity as music welcomed everyone to the event. As registration began the rain poured down but that did not dampen the great festive atmosphere and as the race began the sun shone down for the rest of the event. 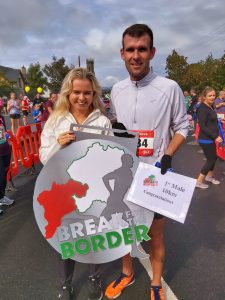 Upon completion of the race, participants were treated to a feast of home baked goods and a hot cup of tea before heading home.

“The wonderful spirit and care that members of the wider community have for the children of Hacketstown was hugely evident over the past number of weeks in the organisation of this event,” said St Joseph’s principal Doireann Hester. “Every sponsor contributed to this and is part of the education of the next generation of young people. The funds raised by this event will contribute to the upkeep of the school over the coming year and will hopefully enrich the experience of the children who are students here. We were delighted with the huge turn out.  The day was a great success and was enjoyed by all.”

To check out more pictures and video clips see Break for the Border – Carlow to Wicklow 10km & 5km on facebook.