Jason Foley from Ballyloughan, Bagenalstown continues to make waves on the national and international stage when he was part of an Irish team which claimed four gold medals out of nine world championship events at Lanaken in Belgium recently.

Last year he won individual gold and team bronze at the under-18 European showjumping championships and this time he lifted individual gold in the event for five-year-old horses.

Performing over four days with some of the best FEI riders in the world, Jason weaved his way through a steadily diminishing field of 250 starters. Two days of qualifying reduced the field to 40 hopefuls and that was whittled down to 10 riders who completed two clear rounds in the grand final on the Sunday.

Going to Belgium, Foley had been very hopeful his horse, Rockwell RC, was ready for the challenge.

“We were going out pretty confident that the one horse I was riding was a very good horse. I had jumped on her in the Dublin Horse Show and she had jumped very well. I knew going out that with a bit of luck anything was possible,” he said on his return. 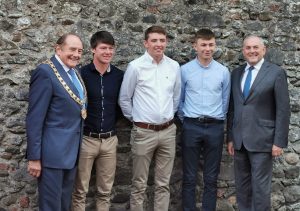 The first round on the last day was not against the clock, but the final round was. Holding his nerve, he went clear and had the best time to clinch gold. Amazingly, with so many of the highest-ranking riders competing in Belgium, it was another local rider in Michael Pender from Castledermot who took a superb silver just a half second behind Foley.

Pender also stood on the podium in the 6-year-old final following another runner-up finish with MHS Cardenta.

Foley became the first competitor under 18 in 42 years to take gold in this event and did so having dislocated his shoulder in a fall three weeks previously.

“It wasn’t so bad. There weren’t any options. I was always going to take part anyway. It is not so bad now. It is getting better,” Jason said.

After his successes last season Foley decided to devote his career to showjumping and has joined the Castlefield yard on a full-time basis.

At the Dublin Horse Show he won the six-year old final, was second in the five-year old and eighth in the seven-year-old. Now he has added a world gold to his Irish successes.

“It is going very well and I am progressing,” Foley said.

He is now planning to spend two months in Belgium where he will gain further experience by taking part in a number of showjumping events.

Rockwell RC was bred by Ronan Byrne and is owned by Kevin Crumley. Foley is also deeply grateful to Ger O’Neill of Castlefield Sports Horse and its owner Sean Cubitt for giving him the opportunity to ride the best horses in the yard.

“We worked hard and she (Rockwell RC) was very good the way she jumped. She is a very good horse in general and we were happy enough going out there with her,” Foley stressed.