OUT of the traps quick, a well-balanced team and a workmanlike display was enough for the Naomh Brid under-17 hurlers to win the Division 2 hurling championship final at Netwatch Training Centre on Sunday morning.

Naomh Brid quickly took control of the game and never allowed the Saints to settle. By the 15th minute they were 0-5 to 0-1 clear courtesy of Jamie Doyle (2), Mark Fitzgerald (2), and Zack Kelly. Conor Kehoe at centre half forward replied for St Mullins.

Naomh Brid, now in full flight, latched on to a long ball out of defence where they struck for their first goal with full-forward Dillon Delaney shooting past Ciaran Harris in the St Mullins goal. Harris was having a good game for St Mullins, clearing his lines many times as the Naomh Brid attacks came in waves. 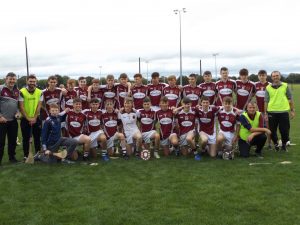 The Naomh Brid U17 hurling team

One of the big differences between the teams was Fiach O’Toole’s accuracy from distance long placed balls while the St Mullins men were unlucky to see a number of shots go the wrong side of the posts in the opening period.

Naomh Brid’s work rate and combination play was excellent and they had built up a commanding 1-8 to 0-3 lead when referee Pat Kehoe call half time.

St Mullins rallied in the first few minutes of the second period but the Naomh Brid defence stood firm. A long-range free from centre-back Fiach O’Byrne deceived everyone and hopped into the net for Naomh Brid’s second goal seven minutes in to the second period to make it 2-9 to 0-3. They went on to add a further 1-3 before the end of the game with James Maher getting their third goal.

St Mullins never gave up with Ciaran Harris, Larry Brennan, Donal Murphy and Eamonn O’Shea among those to shine.

Michael Byrne of Leighlinbridge presented the shield to Ben McDonald who in turn thanked all the players and mentors and the Naomh Brid club for their work with the panel of players.

Adrian O’Neill from the management team congratulated the panel of players and thanked them for their response.

“This is the start to get back where we want to be at senior level and ye are the lads that will do it,” he told them.