A COMMUNITY came together recently to remember a much-loved resident, whose care and dedication to his estate has left a lasting legacy. The residents of DeLacey Abbey, Rathvilly recently planted a tree and unveiled a plaque within their estate to remember the late Danny Pender (66), who died in early July this year.

Danny passed away peacefully following a short illness in the District Hospital, Carlow surrounded by his loving family.

For many years, Danny was a very familiar sight in DeLacey Abbey, cutting the grass, weeding and taking on myriad jobs to enhance his local community. A wonderful neighbour and friend, Danny was always willing to put his incredible skills and abilities to good use to help others.

“Danny was so well thought of and a great friend to most of us here,” said Marie Sibbald. “We just thought it would be nice to plant the tree and have the plaque so that people could remember him.” 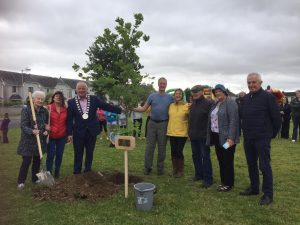 “All the kids in the estate really loved Danny; the small children really took to him. They’re all out now, putting water on the tree saying ‘we miss Danny’, blessing themselves saying a little prayer; it’s really nice for everyone to be able to remember him and for his family to be able to come to the tree, too,” added Marie.

“The raffle was donated to the hospice in Danny’s name. Danny’s friend Paddy Dunne from Rathvilly was a great help with the raffle. We must have had over 30 prizes donated from businesses in Rathvilly, Tullow, Baltinglass … it was great,” said Marie.

A terrific total of €1,125 was raised, which the residents also presented to the hospice on the day.

Son of the late Dan and Kathleen Pender, Danny was raised in Ardnehue, Bennekerry before emigrating as a young man. Danny spent almost 40 years in Germany, where he perfected his skills in the area of engineering before returning to Ireland almost a decade ago. He set up home in DeLacey Abbey with his wife Eileen and became an integral part of the local community.

At the tree-planting ceremony was Danny’s cousin cllr John Pender, who is cathaoirleach of Carlow County Council, Danny’s siblings, his uncle and aunt Seamus and Peg, extended family and many friends in Rathvilly.

Danny’s brother David spoke on behalf of the family and thanked the residents of DeLacey Abbey for their incredibly kind gesture, a lasting legacy to Danny.