IT has stood proudly in the heart of Tinryland for 200 years, so torrential rain certainly wasn’t going to dampen the festivities at St Joseph’s Church as the village marked its bicentenary recently.

At the beginning of Mass, representatives from the various clubs and associations in Tinryland walked in procession to the altar carrying banners and symbols of their organisations.

In his opening address, the chairman of the organising committee Liam Byrne welcomed everyone to the special occasion and went on to remember all the priests who had originated in the parish.

Breda Aylward narrated the procession of the clubs, followed by a description of the special symbols that were brought to the altar. These included a statue of St Joseph, carried by Luke Cahill; a wreath to be placed on an unmarked grave in the cemetery, brought up by Cathal Purcell; clay gathered from the old graveyards in the parish, carried up by Jim Townsend; and the parish registers, brought to the altar by Patrick O’Neill, Jim Deane and Pat Hayden. 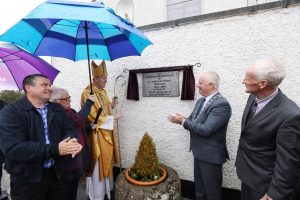 Dancers from the Mary O’Donoghue School of Dancing performed at the beginning of Mass, while Tom Costello and Eamonn Redmond did the readings.

Prayers of the Faithful were read by young pupils from Tinryland NS: Abbie Kane, James O’Donoghue, Eve Kehoe, David Czyzak and Luke McLoughlin. After Holy Communion, Maureen Byrne reflected on the 200-year history of the church, while Liam Byrne concluded by thanking all the people involved in making the event so successful.

Immediately after Mass and while the rain was still falling, Bishop Denis unveiled a commemorative plaque on the outside wall of the church. This was followed by the planting of a memorial tree by cllr John Pender, cathaoirleach of Carlow County Council and also a native of the parish. Symbolic clay from the old graveyards was scattered in the soil around the tree.

After the ceremonies, refreshments were served in Tinryland NS. A beautiful cake, made especially for the occasion by Catherine Brennan O’Toole, was cut by Liam Byrne and parish secretary Pauline Cleary, accompanied by Bishop Denis and cathaoirleach John Pender.

Great credit is due to the organising committee and sub-committees for the event, who have been planning the occasion since last May. Particular kudos go to the catering committee, which did a magnificent job in looking after so many guests in the school following the formalities.