A FEAST of culture, jam-packed with artistic performance and endeavour, delighted Carlow audiences for Culture Night. But the only problem was how to see it all!

Carlow County Council Arts Office hosted this cultural trail of family-friendly events, all free of charge, which was a unique opportunity to sample more than 22 creative events, all taking place around the county on Friday 20 September. An estimated 1,200 people attended the various events in Carlow, all deemed a huge success.
The incredibly talented young people of Music Generation were in Carlow Town Hall, with their trad music ensembles and MouthBox sharing their version of **Old town road***, which led to a standing ovation. 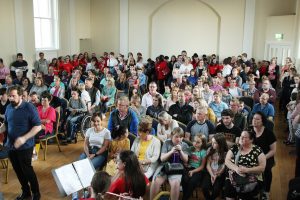 Outside the town hall, the fantastic Dance Republic had a large crowd in awe of their amazing routines.

There were also guided tours of several exhibitions in Carlow County Museum and the public also had an opportunity to view IT Carlow’s art collection.

Carlow Library enjoyed an open night, where a George Bernard Shaw storytelling session and other musical performances welcomed a large crowd.
In Visual, meanwhile, an official announcement revealed that Carlow will host next year’s Pan Celtic Festival. Attractions at the arts centre included pop-up exhibitions from Take A Part Carlow, along with musical performances from Carlow Ukulele Players, Singaloud and Carlow Youth Orchestra, which was joined by the High Hopes Choir, who even managed to be listed among RTÉ’s top ten Culture Night events this year.

Visual also took the opportunity of this cultural explosion to launch its autumn 2019 programme of exhibitions.

Culture Night had something for everyone around the county, too, with a multicultural event including a Latvian celebration hosted by Forward Steps Family Resource Centre in Tullow Library and a Rambling House in O’Shea’s of Borris. Another hit – and Carlow’s first LGBT+ event for Culture Night – was an insight into the culture, skill and artistry of drag make-up with a masterclass from celebrity make-up artist and Carlow native John Paul Payne.
All of the events were free of charge and attracted incredible participation from everyone who experienced and enjoyed them.