THE youngsters who attend Askea Childcare Centre are in safe hands, as acknowledged by a major award that was presented to staff recently.

Manager Veronica Doran and assistant manager Edel McGrath travelled to a gala ceremony in Mullingar to receive a Healthy Ireland award, thanks to the HSE and the National Childhood Network.

The childcare centre participated in the HSE’s Healthy Ireland ‘Smart start’, which places children’s health and wellbeing at the centre of their practice. 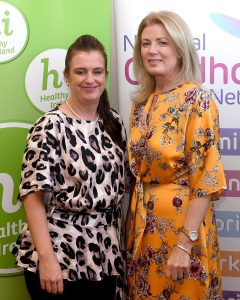 “This has been a two-year journey,” Veronica told Around Carlow Town. “The programme is very wide-ranging because it includes emotional wellbeing, literacy, physical activity, nutrition, healthy eating and oral health as well as health and safety.”

The staff carry out the practice through their curriculum. One of the first measures they took was to provide freshly-made meals for the little pre-schoolers aged from three to five years’ old. This has now expanded to all the children who attend the service, whether they’re part-time or full-time.

The centre was set up in 1992 and has grown over the past 27 years to the extent where it now caters for almost 130 children, aged from pre-schoolers all the way up to six-class pupils.