TRACING family trees and connecting the dots from the present day back to historical times was what the recent Nolan clan gathering was all about.

People with the name of Nolan and its variants such as Ó Nualláin and O’Nolan assembled in the Seven Oaks Hotel, Carlow for a family gathering with a difference!

While the usual family shindig might feature great-auntie Mary from down the road, the Nolans’ get-together involved close and distant relations coming from all over Ireland, England and even America! 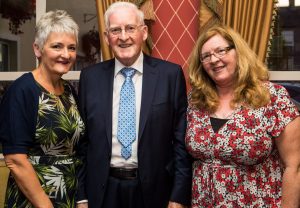 While some of the Stateside cousins made a holiday out of the event, others were content to spend a weekend in September in Carlow, as the county is considered to be their ancestral home. On the day of the gathering itself, a whole itinerary of events were enjoyed, including a boat ride down the River Barrow with Cliff Reid, an outing to the Croppy Graves in Graiguecullen and a visit to County Carlow Museum, where they were given a guided tour. Back at Nolan Clan HQ – the Seven Oaks – Bernie Walsh from Carlow Library’s genealogy department also gave them a fascinating insight into their family tree and history.

The clan then enjoyed a wonderful dinner, after which two people were presented with awards of appreciation for the notable work they do. This year’s awardees were Megan Nolan from Waterford and Desmond Nolan from Galway.

Megan is a 29-year-old writer and critic based in London, whose work has been published in the New York Times, the Sunday Times, The Village Voice and The Guardian. The other recipient, Des, was recognised for his career as a chemist and teacher and his encouragement of Galway’s youth to excel in the classroom and on the pitch.

A final award of appreciation was presented Catriona Nolan O’Brien for her dedicated service to the clan as chief and long-time supporter.