THE birthday cake tasted extra-sweet after a 5km workout, as Carlow Parkrun celebrated its second anniversary. Parkrun is a volunteer-led initiative that organises free 5km runs every Saturday morning.

More than 50 runners and walkers took part in the anniversary event at Carlow Town Park, with the route taking in the Barrow Track. A marquee had been set up at the finish line, where runners and walkers enjoyed hot beverages and some special birthday cake.

Parkrun tourists were also there. These are runners who travel around to different Parkrun events. Unfortunately, the celebrations clashed with Ireland’s World Cup fixture against Japan, as volunteer Lisa Kennedy explained. 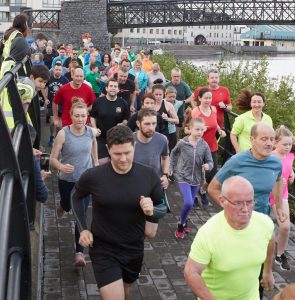 Runners pictured at the start of the second anniversary of the Parkrun at the Barrow Track in Carlow town
Photos: michaelorourkephotography.ie

“It was an awkward day when you have it with the rugby but, to be honest, I think anyone who did come was happy they missed the rugby!”

On average, 60 people participate in the Parkrun every week. There is a core team of eight or nine that keeps the Carlow town event going, with others coming in and out when they can. Organisers would love that people who regularly attend the event also volunteer.

“It’s nice to give back; it’s such a good thing to keep going,” said Lisa. “With the venue, I don’t think there are as many courses which are as nice as ours, down by the Barrow. It’s so lovely, so many people out on the river on a Saturday morning – the rowing club and the dragon boat racers.”

Having put down roots in the Carlow community, the event has become a firm fixture with local festivals. Last Saturday, it was part of Féile an Fhomhair, the autumn bi-lingual festival, while it’s also part of Mensana Fest.

“It’s not just about a 5km run or walk; it’s about community. We are trying to build a good strong community that comes together every week,” said Lisa.

Some who take part in Parkrun are new to Carlow and it’s a great way to get to know the people, while post-run refreshments are usually consumed in The Clink on Dublin Street.

“It’s a global thing, but it’s unique and each one is different. I definitely think we have something special in Carlow,” concluded Lisa.