A LABOUR of love and a testament to its creator’s unending patience and resolve – a stunning replica of Lisnavagh House, Rathvilly – has been completed. Thomas Murray from Myshall has once again created an extraordinary miniature model of a stately home, perfectly proportioned and carefully constructed to the exact detail of its original.

The model of Lisnavagh House is made to 1/48 scale and based on photographs Thomas took of the house and his knowledge of Lisnavagh, having visited many times since childhood. He began the project at the beginning of June and spent an incredible 197 hours constructing it, using MDF and mirrors.

The detail is impressive, with each pane of glass, chimney stack and shrub delicately made. 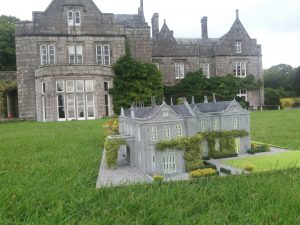 Little and large; Thomas Murray’s model of Lisnavagh House in front of the real thing

“I do everything by the eye – no magnifying glass – if it looks right, it is right,” smiles Thomas, adding that he uses a mixture of tools and his own hand to make each detail.

“Blood, sweat and tears really does go into it,” laughs Thomas. “I have a cabin out the back of the house and I could be in there working away till eleven o’clock at night … no problem! I just love it.”

The replica will go on permanent display in Lisnavagh House and will be open to the public as part of the county’s Big House Festival, which runs this month. The weekend of 26-27 October provides a rare opportunity to enjoy guided tours around the impressive Lisnavagh by owner William Bunbury, while on Sunday 27 October, pop-up plays followed by supper will take place as part of the festival.

Earlier this year, Thomas created an extraordinary miniature model of Altamont House, which he completed over five weeks, amounting to almost 150 hours of work.

He donated the model to Altamont Plant Sales, where he works, to commemorate the 20th anniversary of Corona North, former owner of Altamont House and Gardens.

His next project is a replica of Oak Park House in Carlow while he continues to work away on his own 60-room Georgian mansion to 1/12 scale. His ultimate goal is to open his own small museum, where the public can view his work and get an understanding of what life was like for those who lived in these period homes in times past.

To see more about Thomas’s work, check out Thomas Murray Miniatures on Facebook.