A NEW chain of office has been commissioned for Tullow Municipal District, the county’s newest electoral area. At its September meeting, the district’s first chairperson, cllr John Murphy, was presented with the new chain of office, designed and made by well-known local jeweller Philip Bramley.

“Philip did an absolutely super job on it … it will definitely be there for Tullow Municipal District long after I’m gone,” smiled cllr Murphy. “It’s an absolutely great job.” 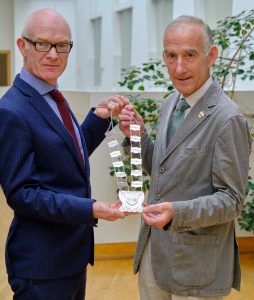 Director of services at Carlow County Council Michael Brennan (left) hands over the new chain of office of the Tullow Municipal District to cathaoirleach John Murphy. The chain was created by Bramley Jewellers in Carlow
Photo: michaelorourkephotography.ie

Last May’s local elections saw the county divided for the first time into three municipal districts: Carlow, Bagenalstown and Tullow. With chains of office for both the mayor of Carlow and the chairperson of Muinebheag Municipal District, it seemed only fitting that Tullow would have one, too.

“As the second-biggest town in the county, I think it’s only right that there should be a chain of office for Tullow. It will be there for years to come and available to the chair for any official events,” explained cllr Murphy.

“Obviously there are protocols, and the cathaoirleach of Carlow County Council takes precedence, but there are lots of occasions when it can be worn,” he added.