CARLOW activists took to the streets of the capital to force the government to take action on climate change. The Extinction Rebellion Carlow group led a ‘Funeral for the world’ procession to mark the beginning of a week-long series of protests in Dublin.

Twenty-five members of the Carlow Extinction Rebellion group travelled to Dublin to take part in the protest. They joined up with other protestors from Cork, Kildare, Wexford, Roscommon and Clare and marched down the quays with mourners holding a coffin symbolising the earth’s future.

“There was no hostility from cars, a couple of beeps from supporters … a nice positive atmosphere,” said Kate Campbell of Extinction Rebellion Carlow.

There was a banner drop-off at the Ha’penny Bridge, while the group headed to Merrion Square for a rally with other climate change advocates from across Ireland.

The protest aims to disrupt business and raise awareness of demands on the government to tackle climate. 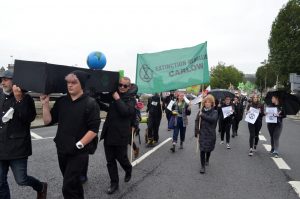 Kate, who lives in Graiguecullen, said time was fast running out and the government has to act. “It’s all very well to say ‘recycle and economise’. It’s gotten to the stage where the government has to step up. In terms of initiating solutions to climate change, we are the worst in Europe this year. We are blessed with a lot of green space and wind in this country. We have a lot of advantages that many countries do not have, but we are not using them.”

Kate pointed to the recent report prepared by the Intergovernmental Panel on Climate Change, which called for prompt and decisive action.

As the protests continue in Dublin, some national commentators have criticised the imposition caused. Kate rejected the criticism, pointing to what was at stake.

For more information, check out the Extinction Rebellion Facebook page.