It took place on Sunday 22 September as part of the decade of centenaries and in keeping with the museum’s aim of promoting the Irish Defence Forces’ militaria.

“We had 11 vehicles on show from the army and a number of weapons, militaria and badges going back to 1922 predominantly,” said Paul Maguire, curator of the military museum.

The exhibits from the Irish Military Vehicle Group were from UN service in Lebanon and East Timor, including military police jeeps and a bomb disposal trailer. And a man from Tipperary brought along a World War II-era Kublewagen. There were also re-enactors from Irish Great War Society in Gorey, while members of the defence forces in Kilkenny provided information about the service at a stand. 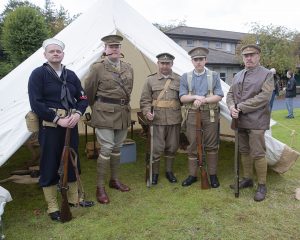 It was a fantastic turnout considering the atrocious weather and Paul expressed his gratitude to exhibitors and visitors alike.

“You’d give great credit to people who turned up to visit,” said Paul. “I’m delighted with the effort people put in to be there.”

Great interest was generated from the event, with a number of enquiries for school visits being made to the military museum.

The museum, which is located in the old church at St Dympna’s Hospital, is now open until November before closing for the winter in December. For more information about the museum, contact 087 690424