This is the second time that the title heads to Carlow. The event was a fantastic success once again with good numbers attending and participating.

In the preliminary round, Aoibheann Kearney qualified for the last 16 with a win over Naomi Moore, Alex Murnane beat Ailish Murphy, Orla Duffy won against Aoife Williams and Celine Chelairu took the frame needed against Chloe Carey. 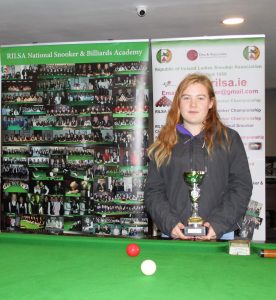 The top half of the draw saw number one seed Sileena Ennis Marks move through with some ease to the semis with wins over Aoibheann Kearney and Vera Lawlor. Caroline O’Connor had wins over Niamh Barret and Abbie Thompson.

In the bottom half of the draw, number two seed Chloe Hutton overcame Kristin Earles and Jessica Beatty while Chantelle Meaney won over Emma Daly and Fiona Carr to complete the semi-final line-up.

With three players representing St Laserian’s in the semis, it was certain that one would reach the final. Sileena overcame Caroline O’Connor while Chloe Hutton finished strongly against school mate Chantelle Meaney to meet Sileena in the final.

The final itself was a tense affair with both players taking a few minutes to settle. Sileena went into the lead but Chloe came back strongly to overtake her on the colours to take the match and title of RILSA National Special Needs Snooker Champion 2019.

Congratulations to Chloe on her win and to Sileena on a fine performance. Thanks to Rachael, Mary Teresa, Veronica, Deirdre and all the other teachers from the schools for their help and support. Thanks to Aidan Murray for refereeing the final and Christine for marking the score.

All those who took part will receive National Ranking points in both the Special Needs Ranking and RILSA National Ranking to encourage them to continue to come out and participate on the RILSA tour.