Ireland claimed an 11-14 (80) to 0-2 (2) win over Croatia in Saturday’s third-fourth placed game in wet and mucky conditions at Wimbledon Park.

With many of the squad playing for Ireland in their first International competition, skipper O’Halloran was delighted his side finished on a high, after losing the semi-final to eventual winners Great Britain – a game where Ireland dominated possession but struggled to get scores.

“It was absolutely fantastic to bounce back and take third spot,” he told The Nationalist at the event in Wimbledon.

“We spoke before the tournament that we had about 15 of the 21 players that hadn’t played 18-a-side before. 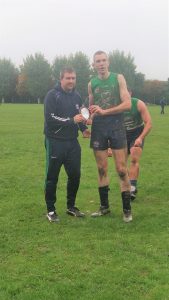 “We have a lot of young boys in their early 20s and a few auld boys like myself. It was such a learning curve and to go up levels day-by-day, it was just great to watch and it was heartening to watch.

“To finish third, there’s a little bit of disappointment in terms of our position, but we were struggling for numbers, and today’s performance makes up for it all.

“Croatia are a good side, and we wanted to put them to bed good and early and so we did.”

O’Halloran was one of four Irish players to feature on the ‘Team of the Tournament’, picking up one of the centre spots along with Blessington’s Martin Shannon.

It was a pretty successful week for the Irish teams, with the women’s side, the Banshees, retaining European silverware.

The now Galway-based O’Halloran turns 37 next month, and had great support from his girlfriend Michelle and three-and-a-half-month-old son Odhran.

He’s hopeful that Aussie Rules can grow in Leinster, where the South Dublin Swans in Terenure are one of the few clubs in the region at present.

“There have been attempts over the last couple of years to get more local interest going with Aussie Rules,” Paul said.

“South Dublin Swans in Terenure is really the only club that covers that area. Within that club there’s guys coming from all over. Shane Faulkner from Rathvilly was playing with them this year, and guys have travelled from Meath and Kildare and places like that.

“Really it depends on someone having the time and patience to try and generate the interest to get a club up and running.

“We try to tailor our own season around the likes of lads playing GAA, but it’s definitely not easy.”

The main focus internationally now is for the International Cup next August in Melbourne, with preparations already having begun in earnest.