THE roar which greeted Jason O’Neill’s winning point, four minutes into injury time at the end of Sunday’s senior hurling championship final, said everything you needed to know about what the result meant to the folks in St Mullins.

The club claimed their 27th senior title as the late afternoon shadows grew long across the Netwatch Cullen Park sod. But it was the manner of this win – with a late, late score after playing three quarters of the game with 14 men, against their neighbours going for three in a row who, slowly but remorselessly, had reined in a six-point half-time deficit – which gave it all a special glow. It counts as a sweet victory alright.

Sunday’s game was a cracking end to the local hurling year. It was a proper battle between two teams who know each other’s habits as well as they know their own. But that level of familiarity didn’t lead to a game bogged down by players fearful of making a mistake. This was particularly true of the St Mullins side who produced more moments of class.

Patrick Boland’s goal was a throwback to the old days as he connected first time above his head with a sliotar dropping into the square to send it flying past Dean Grennan in the Rangers goal.

That goal put St Mullins five points ahead after just 12 minutes, but three minutes later they must have felt their chances of winning the cup were dashed when Ger Coady was shown a straight red card for a challenge which laid Jon Nolan flat on the turf.

The St Mullins response was swift, however, and when Seamus Murphy lashed in his team’s second goal scarcely a minute later, you knew we had a game on our hands. Just as you knew St Mullins would need every ounce of their eight-point lead to see out the game, and so it proved.

They had big performers all around the field with different players standing up at different times. Seamus Murphy was a workhorse throughout, James Doyle popped up with a couple of big points, Gary Bennett and John Doran were tenacious in defence.

But no-one had a bigger influence than Marty Kavanagh. Every superlative has already been used alongside his name during his decorated career but Sunday’s performance must go down as one of his finest.

It wasn’t just the symmetry of his final tally – 10 points, five from play – or his willingness to do the hard work around the middle of the pitch. It was also his ability to make the correct decision time and time again with the ball in hand that so often steadied his team when Rangers were breathing down their necks.

In an interesting aside, Marty was the man of the match but he wasn’t the game’s top scorer. That distinction went to Rangers free-taker Denis Murphy whose tally of 1-13 equals the highest score ever in a Carlow senior hurling championship final, matching Eamon Long’s 5-1 when Carlow Town won the championship in 1961. All 13 of Denis’s points came from frees. As brilliant as Denis was from the placed ball, he will rue a couple more that drifted wide in the second half. Neither were easy by any stretch of the imagination but in a game of such fine margins, these things matter.

The bigger issue, of course, was Rangers’ over reliance on their free-taker. A return of just 1-6 from play is not good enough, however it speaks volumes for the St Mullins defence who seemed to be operating at higher revs for most of the game. 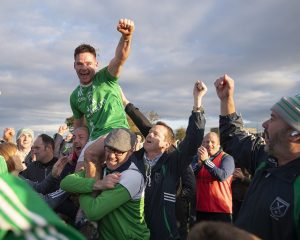 Marty Kavanagh, man of the match in the senior hurling final, is raised shoulder high after the final whistle at Netwatch Cullen Park on Sunday Photo: Thomas Nolan Photography

A big talking point ahead of the game was how St Mullins would deal with the loss of Jack Kavanagh through suspension. In short, they coped admirably and they matched Rangers in every department around the middle.

Rangers used Richard Coady and, in the second half, Kevin McDonald as the spare man is a sweeper role and while both picked up a couple of balls, in general St Mullins were clever enough not to play into Rangers’ hands in that regard, effectively nullifying the numerical disadvantage.

Perhaps St Mullins will take greatest satisfaction from the fact they watched Mount Leinster coming up behind them in their rear-view mirrors for the entire game, but when Rangers finally pulled level, it was St Mullins who found another gear.

Sunday’s minor final was another hugely interesting contest between Bagenalstown Gaels and Mount Leinster Rangers. Gaels won this championship in 2018 under their previous guise as Muinebheag and were looking for back-to-back titles along with a much-coveted minor double for 2019, having already won the minor football final this month.

However they needed a late free to snatch a draw after a game which they controlled for large swathes. If they had been that bit more clinical in front of the posts, it’s unlikely Rangers would still have been in the game going into the last five minutes, but Rangers never know when they’re beaten. They pushed ahead with two late points, but credit to Gaels who fought back with the last two points of the game courtesy of Jake Doyle frees.

Undoubtedly the most heartening aspect of the match, from the point of view of Carlow hurling as a whole, is that Bagenalstown are developing some of the finest young hurlers in the county at present. Their renewed club structures mean they will now be given a better chance to mature and realise their potential as seniors.

With Bagenalstown winning the intermediate A championship final on Saturday, they are taking the necessary steps to ensure there is a strong fifth team at senior level.

Meanwhile, it’s St Mullins who sit on top of the tree and as the sun fell lower in the sky on Sunday, the slanting light shone through a thicket of green and white.

The cup was going south; further south than many expected.