CARLOW club hurling received a massive shot in the arm when Bagenalstown Gaels won the intermediate A championship at Netwatch Cullen Park on Saturday. This result sees the newly founded club go up to senior ranks next season which can only be good for the game in the county.

It was far from a great game but the heavy rain which drenched the players in their pre-match warm-ups made it a battle of wills. In the adverse conditions it was remarkable to see so many on both sides handle the ball as well as they did.

With Craig Doyle landing two points from play, another from a free and John Rogers also firing over the Rangers crossbar, there were fears that they could repeat their 4-20 to 0-8 win from earlier in the season. 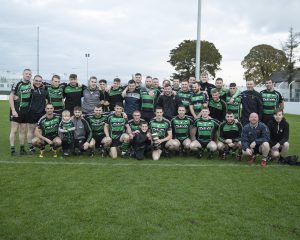 It took Rangers until the 12th minute to score and that was from a David Grennan free. He quickly added three more to tie the sides by the 19th minute. In that period James Kelly for Rangers was unlucky to see his deftly placed shot just go outside the left-hand upright at the tunnel end of the ground.

Goal chances were few and far between and at the break the sides were still tied at 0-6 each. The lead changed hands on three occasions in the first 20 minutes of the second half. James Kavanagh, the Rangers keeper, did well to block a shot from David Miley on 35 minutes after Jamie Whelan and Ciaran Kavanagh exchanged points. Neither side was giving an inch.

It was going to take something exceptional to split the teams. That moment came on 50 minutes and from an unlikely source. Bagenalstown captain Alan Corcoran is the rock on which so many rival moves flounder. This time he turned from gamekeeper to poacher when he sold his marker a delicious dummy which opened up play in front of him. Without hardly looking at the posts and just inside the Rangers half, he let rip and the ball flew over the crossbar.

A minute later Bagenalstown put one hand on the title when Jamie Clarke shrugged off a would-be tackler as he ran at the Rangers defence. He eventually broke free and his shot was low and hard to the net.

Bagenalstown were almost there. When Corcoran dispossessed a Rangers forward who threatened to get away from him there was no way they were going to be overturned.

“That was the goal. To get Jacko (John Rogers), Craig (Doyle) and the young lads coming through playing senior hurling. This was about everyone. We are pushing through together as a group.”

Gary Lawlor’s point for Rangers still ensured the champions-in-waiting had to retain their concentration. Craig Doyle’s seventh point of the game meant their supporters could breathe a little easier as they looked forward to a place at the higher level next season.

“It means absolutely everything. We got together at the start of the year and said our goal was to get back up senior. This was part of the road. It was hard won. It was a tough championship,” said Doyle.

“We said from day one this was what we wanted – to get back up – and to win this today means everything. We are delighted. It was a very tough game. Credit to Rangers, it was never going to be like the last day. We said that all week and we are delighted to get the win.”

There was a disappointing end to the game as Rangers were reduced to 14 players when James Kelly saw red in the harshest of circumstances. No doubt he and a Bagenalstown defender faced up to each other and the Rangers man did lift his hand in the direction of his opponent’s helmet. From the stand it looked like the merest touch but the umpire called the referee. In the meantime the two players had shown restraint when walking away from each other rather than continuing their argument. If that sort of incident merits red, then the law needs to be revisited.

It’s a moot point, but worth mentioning. The big story was Bagenalstown’s return to the top tier of Carlow hurling.