CARLOW intercounty star Marty Kavanagh produced the performance of his career as he led St Mullins to an edge-of-the-seat senior hurling championship triumph (2-17 to 1-19) over Mount Leinster Rangers at Netwatch Cullen Park on Sunday.

While Kavanagh took the man-of-the-match award, Jason O’Neill was the hero of the hour when he scored the winner at the death.

The alloted three minutes of injury time had elapsed and it seemed as if the game would end in a draw, but O’Neill’s intervention gave St Mullins their 27th title and denied Rangers a three-in-a-row. 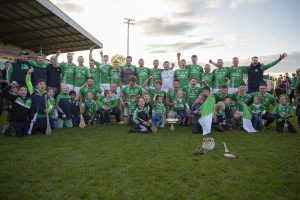 The win was made all the sweeter as St Mullins had to play for three quarters of the game without Ger Coady who was controversially sent off for a foul on Jon Nolan.

“The best day of my career, 100%,” Marty Kavanagh said after the game. “I missed the Joe McDonagh win. I captained Carlow in the Christy Ring Cup final but the club is where it starts.”

During the week Kavanagh walked around the St Mullins clubhouse and said he was struck by the sense of history.

“There are pictures all round. Now to have a picture with the cup means so much,” the winning captain said. He confessed he was hugely disappointed with his performance in the semi-final where he shot a string of wides against Ballinkillen.

“I let a lot of lads down. I set standards for myself and I was below par. The lads got me out of jail last week,” he said.

He said he was astonished that referee Paud O’Dywer sent off Ger Coady.

“Scandalous. You can say what you like, I don’t know how it was a red card,” the St Mullins captain insisted.

He went on to say the victory was not just for the team who lined out on the day, but for the entire panel and a parish.

“I was captain but this was for a lot of lads who were not playing today. It didn’t feel as if we had 14 players. It felt as if we had 20 players. There was so much passion and so much heart. A lot of lads are not known outside of St Mullins but we know the lads. It was unbelievable.”