THE annual Charlie Curran Memorial Run returns for its sixth edition next January with some new beneficiaries.

The event, which takes place on Sunday 26 January, will raise funds for the Irish Guide Dogs for the Blind and Brain Tumour Ireland.

The five-mile event was launched recently at The Dome with representatives of the two charities.

Brain Tumour Ireland provides support to more than 400 people who are diagnosed with a brain tumour in Ireland each year, along with raising awareness of the condition. The charity, which receives no state funding, also facilitates a support group in the Éist Cancer Support Centre.

The Irish Guide Dogs help to provide a life-changing service to those who are blind, visually impaired or families of children with autism. Well-known Carlovian and guide dog user Nicky Kealy attended the launch. 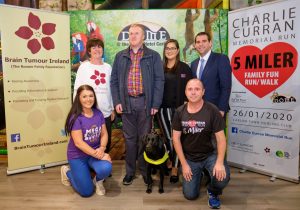 The run is organised by Charlie Curran Jnr in memory of his dad Charlie Snr, who passed away at the age 52 from a heart attack.

Charlie was delighted to be able to support and raise awareness of the two charities.

“We hope to keep what we have been doing over the last number of years going,” he said. “There’s a really good spirit at the event and it keeps those good vibes going after Christmas.”

It’s hoped that road closures will be secured for the run and cllr Fintan Phelan, who attended the launch, has been providing assistance to organisers.

Once again, Charlie hopes for the support of local people and businesses to ensure the run’s success.

The event has received great support in the past from a variety of companies and groups like Ray Whelan Ltd, Unum and Carlow Lions Club.

Anyone who can support the run in any way, from volunteering to providing refreshments or spot prizes, is asked to contact Charlie on 086 2141322.

Starting at Carlow Town Hurling Club, the five-mile chip-timed run heads out towards the Castledermot Road. The popular kids’ dash once again returns.

And each participant of the January event will receive a specially-commissioned medal featuring the iconic Oak Park arch.

The event has sold out the last three years, so to avoid disappointment, register at popupraces.ie. Adult entry is €16, while it’s €8 for juveniles. And entry to the kids’ dash is €2, which can be paid on the day.