Changing of the guard for Fianna Fáil

ACKNOWLEDGING the past while looking with anticipation to the future formed an integral part of the recent AGM for Carlow Fianna Fáil members. The local cumann was out in force for the annual meeting in Reddy’s, with a number of new officers elected.

Tribute was paid during the meeting to the hard work and dedication of outgoing chairman and former county councillor Donie Nolan, along with outgoing treasurer Noel Dowling, who also gave so much to the party over the years. Both men were presented with gifts as a small thank you for their commitment over the years by senator Jennifer Murnane O’Connor. 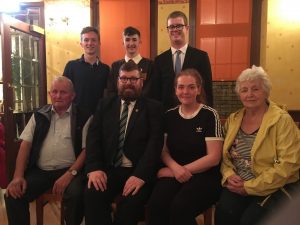 At the meeting, it was agreed that the party’s main objective was to elect a Carlow Fianna Fáil TD at the next election. Senator Murnane O’Connor, the chosen candidate, outlined her work with the farmers in the ongoing beef dispute and discussed the need for increased investment.