Blood Brothers played to packed houses at The Pres

STUDENTS, staff and parents associated with Presentation College, Carlow were treated to a top-class musical when the school staged the popular classic ***Blood brothers***. Weeks of hard work on perfecting the story of how twin boys separated at birth fared when they were brought up in completely different environments.

The production was a collaborative effort between staff and students, with Brian O’Sullivan playing the lead role of Edward, while Mikey was performed by Aaron Smith. David Doyle was at the helm of the musical as director and choreographer, assisted by Abbie Nolan. Fiona Watchorn was producer, while Maeve Lyons led a live orchestra as musical director. 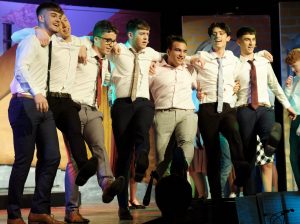 Members of the chorus line put their best foot forwards!

Sound and lighting were courtesy of Stephen Corry and John Smyth respectively, while the costumes were organised by teachers Claire McHugh and Orla O’Driscoll.

With a run of sell-out shows, this year’s musical in The Pres will be remembered as a formative part of the students’ school careers.