THEY’RE a talented lot in Coláiste Eoin, Hacketstown as this year’s ‘Lip sync battle’ can attest! Almost 150 students, along with some brave teachers, took part in the two-night battle to see which group would be victorious.

Students channelled their favourite pop stars by lip-synching along to backing tracks while making impressive moves on stage. Such was the popularity of the challenge that it had to be held over two nights to accommodate the 29 participating acts. 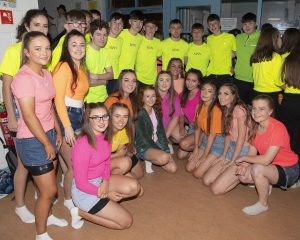 Competition was fierce and the smell of teen spirit hung heavily in the air, but in the end the winners from the first night were a bunch of first years – Grace Mulhall, Emily Heffernan, Ella Forde, Ruby Connolly, Annie Lawlor, Heidi King, Natasha Donovan, Kate Ryan and Amanda Murphy.

Winners on the second night were representatives from fifth year – Seán Moran, Anthony McDonald, Niall Tompkins, Óisín Foley, Eoin Connolly and Brandon Ryan. The events were a huge success, thanks to teachers Liz Farrell, who co-ordinated and acted as MC, and Nessa O’Meara, who organised the acts, was a judge and even took to the stage and performed!

Caoimhe Byrne and Deirdre McCarney assisted with dance moves and confidence- building, while Kieran Fitzgerald and crew did a brilliant job on sound and vision. The parents’ association rowed in behind the project, helping with the vote-counting. Liz Farrell would like to thank all involved for making it such a successful even