CREATIVITY, originality and the business know-how to make it all happen earned a number of Carlow salons top honours at the recent Alfaparf Milano Fantastic Hairdresser Awards 2019.

Berlin Hair Lounge, Shamrock Plaza, Carlow was awarded one of the most coveted awards of the night, the Fantastic Salon Award, while Kerrie-Ann Ayres from Blake’s Salon at Fairgreen Shopping Centre, Carlow was another big winner, taking the Fantastic Fantasy Hair Stylist Award.

Now in its tenth year, it is the most widely-attended awards ceremony in the Irish hairdressing industry and took place in the RDS, Ballsbridge, welcoming some 1,200 stylists and industry insiders. The prestige of the awards guarantees a large volume of contestants, with more than 300 hairdressers from across Ireland dedicating months of hard work preparing their entries for the ten categories. 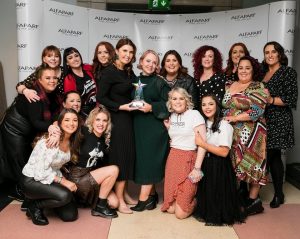 All eyes were on the amazing creation of Kerrie-Ann Ayres from Blake’s Salon, winning her the Fantastic Fantasy Hair Stylist Award. Blake’s colleague Svitlana Snigur also turned heads with her work, winning third place runner-up in the same category.

All of the awards were judged by a panel of five internationally-renowned industry experts.

“The awards extend a platform to participating salons to show their creative excellence and recognise the skills and talent required to create styles of real beauty,” said David Donnellan, managing director of Alfaparf Milano Ireland.

Other local winners included Becka Long from Blake’s Salon, Melaina Maher from Berlin Hair Lounge and Kellie Barcoe from Rustiq Salon, Tullow Street, who were all placed in the top ten of the Fantastic Junior Awards.