Fine performances from local gymnasts at the European Championships

SIX gymnasts from the Carlow gymnastics club represented Ireland at the European Acrobatic Gymnastics Championships in Holon, Israel. Eilis O’Neill, Rebecca Shannon, Ella Sullivan, Shonagh Travers, Seoighe English and Aine Doyle made the trip to Holon, travelling out on 21 October for pre-competition training. The competition itself was from Thursday to Sunday, 24-27 October. It was an intense week but the girls rose to the occasion. They produced some high quality, impressive performances competing alongside the elite of Europe.

Eilis, Rebecca and Ella had three routines, balance, dynamic and combined and Shonagh, Seoighe and Aine had two routines, balance and dynamic. The girls missed out on the finals by a small margin, the 12 to 18 group were the reserve of Russia, Israel, Great Britain and Portugal who all dominated the medal positions. 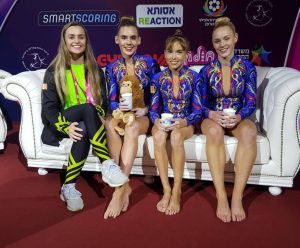 Shonagh Travers, Seoighe English and Aine Doyle who featured in the 11 to 16 category with coach Sara Rennick

The Carlow gymnasts were supported in Israel by their parents while their friends, family and club mates watched the competition at home online.

The girls have very little time to rest now as the next national competition takes place in Sports Ireland on 10 November.

It is the National Acro Team Trophy and the club will have teams entered at all levels to compete for the most coveted trophy in acrobatic gymnastics.

No regrets as Carey proud of his team

Padraig Amond – Injuries take their toll on our squad