Directed and produced by local stalwart Paddy Behan, Sive took to the stage at the George Bernard Shaw Theatre over five performances recently, filling the venue nightly and reaffirming the continuing appeal of this Irish classic. Exploitation, greed, love and tragedy are all played out by a terrific cast from Carlow Little Theatre, who perfectly matched Keane’s almost lyrical dialogue.

The story of Sive is centred around the eponymous 18-year-old, who lives with her uncle Mike, his wife Mena and Nanna, who is Mike’s mother. Local matchmaker Thomasheen Seán Rua convinces Mena to organise the marriage of Sive to the elderly Seán Dota, which will result in the husband and wife receiving £200.

The resentful Mena was played by Carlow Little Theatre’s celebrated Keelin McDonald, whose outstanding performances never fail to amaze audiences. This time, she was exceptional as the vengeful Mena, capturing her greed, spite and bitterness to almost chilling effect. 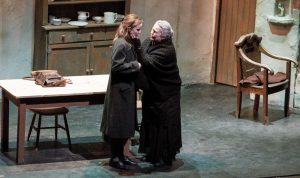 Zoe Hayden as Sive and Pauline Hayes as Nanna on stage during the Carlow Little Theatre Society production of Sive in the GBS Theatre in Visual
Photos: michaelorourkephotography.ie

John Hickey played the part of devious matchmaker Thomasheen Seán Rua. John was terrific in this production, managing to perfectly capture that mix of scheming, greed and comedy, all of which have made this character one of Irish theatre’s most memorable.

Nanna Glavin was played by Pauline Hayes, who delivered some wonderfully humorous lines with great panache, bringing out the many facets of this character.

Mike Glavin was played by Robbie Hogan, a newcomer to the Carlow Little Theatre stage but no less effective. Robbie particularly came into his own while portraying the anguish Mike faced when considering the fate of his beloved niece Sive, forced into an arranged marriage

Larry McNally was very strong in the role of Seán Dóta, while Scott Cooper as Liam Scuab was another super addition to the cast. Pats Bocock was played by Paul McManus and Carthalawn played by Oisín O’Reilly, enhancing the production enormously each time they appeared on stage.

The role of Sive was split over the performances by Ceola Webb and Zoe Hayden. Both portrayed her innocence and helplessness in a very sympathetic way, building perfectly to the play’s heartbreaking finale.

The set, lighting and costumes perfectly captured rural Ireland in the 1950s, while the pace and mood were really well pitched throughout.

A fantastic production from Carlow Little Theatre, which justifiably prompted standing ovations following each and every performance.