Massive tome records 470 years of the Watson family from Kilconnor

A FASCINATING family history over four centuries merges with a remarkable insight into the social history of Co Carlow in a new book entitled The Watsons of Kilconnor, Co Carlow, 1650- present.

Written by Peter JF Coutts and Alan Watson, the book was recently launched in the Lord Bagenal Hotel, Leighlinbridge with generations of the Watson family in attendance, along with family friends and the wider Co Carlow community. Cathaoirleach of Carlow County Council cllr John Pender and Ronan Murphy, chief executive of Horse Sport Ireland, were among the speakers, both paying tribute to the extraordinary research and dedication of the authors.

“I want to pay special tribute to Dr Peter Coutts and Alan Watson for his excellent book extending to 578 pages. It is obvious that so much research and preparation has gone into this publication,” said cllr Pender. “So great credit is due to Peter and Alan for producing this book, which will be available not alone to the Watson family and its future generations but also as a reference book to anyone researching Carlow’s rich history.” 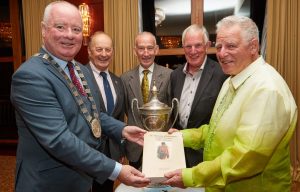 The book describes the history of a humble family that migrated from England to Ireland in the mid-17th century and put down roots at Kilconnor. By the end of the century, many members of the family had joined the Society of Friends (Quakers) and were part of the landed gentry. During the late 17th and 18th centuries, family members established themselves elsewhere in Ireland and later in Australia, England and New Zealand. In those countries, the Watsons rose to prominence in a wide variety of roles, eventually abandoning the Quakers for the Established Church.

Today, the family is still held in high regard for its past and ongoing contributions to equestrian sports, including horse racing, fox hunting, polo and, in this era, three-day eventing.

John Watson of Ballybolger, Ballyloo represented Ireland in the Olympics, winning silver in the world eventing championships and team gold in the Europeans. More recently, John’s son Sam Watson was on the Irish team that won silver at the World Equestrian Games in the USA in September 2018.

Other prominent members of the family include John Henry Watson of Ballydarton, the inaugural master of the Carlow Hunt from 1808, and Corona Deane Lecky Watson, who bequeathed Altamont House and Gardens to the state following her death in 2004.

The author Peter JF Coutts is an Australian archaeologist, whose mother was the youngest daughter of William Currie Watson, who was born in Ballydarton. The Watsons of Kilconnor, Co Carlow, 1650- present was researched by Peter over an incredible 14 years, with the author visiting the county on a number of occasions for research purposes.

As part of his studies, Peter consulted local historian Michael Purcell and Robin Harvey, executor of Corona North’s estate, as well as members of the Watson family in Carlow, particularly John Watson from Ballybolger. In the final two years of his research, Peter was joined by fellow author Alan Robert Watson, a descendant of John Watson of Kilconnor.

The book costs €50 and is available in Eason, Fairgreen Shopping Centre, online and at Carlow County Library.