TWO curly-headed mop-tops were utterly transformed when they went under the razor and emerged as svelte suedeheads!

Friends Eoghan Cowan and Neil Webb had thick, glossy, curly heads of hair, but their tresses were gone after a quick buzz of an electric razor. But it was all for a great cause, because they managed to raise €3,000 for the children’s ward in St Luke’s Hospital, Kilkenny after Eoghan’s little sister Heather was treated there last year, when she was diagnosed with cancer. Heartbreakingly, Heather didn’t survive and she passed away on 18 July last year, leaving behind her parents Mary and David and her devastated family. 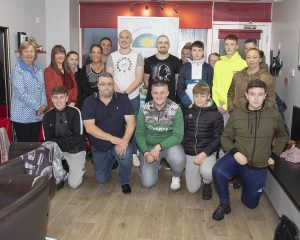 Neil Webb and Eoghan Cowan, who had their heads shaved for the childrens ward in St Lukes Hospital in memory of Heather Cowan, with family and friends
Photos: Thomas Nolan Photography

Eoghan and Neil wanted to organise a fundraiser for St Luke’s Hospital in honour of Heather, so they hit upon the idea of growing their hair long last January and doing a charity headshave.

The resulting corkscrew curls were the envy of many, but the plucky duo marched into Tara Sheehan and Annmarie Lawler’s barber shop on Tullow Street and got themselves fleeced. The €3,000 they raised has now been ringfenced to use in the children’s ward.

“The boys are over the moon, they’re very pleased,” Neil’s dad Shaun Webb told The Nationalist. “They like their new look; everyone says that they are looking good.”