This event includes competitions for gymnasts from grade one all the way up to international level for 11-to-16 and 12-to-18 age groups.

Carlow gymnastics club entered teams at each level and in some competitions they had two teams competing. Each team comprised of a pair and a trio, where both scores counted.

At FIG level (international) teams could be made up of three groups with the top two scores counting.

In addition to wining the overall trophy, the trio of Shonagh Travers, Seoighe English and Aine Doyle, who competed at the recent European Championships in Israel, won trophies for the highest overall score at FIG level for artistry and the highest technical score. 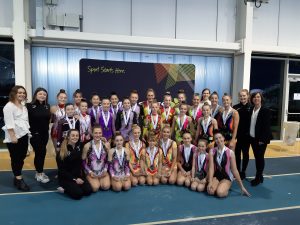 The Carlow pair of Roisin O’Toole and Laura Wade won the trophy for the highest technical score at NDP level.

This outstanding success by the Carlow club is the icing on the cake after a very busy and successful year which saw two groups represent Ireland at the European Championships in Israel.

Several groups also won medals at the Turin Cup in July and at the national championships in May while the NDP gymnasts brought home medals from an invitational competition in Wales last March.

All of these great successes ensured the Carlow club came out top in Ireland this year in this national team competition.