THE raffle of a vintage Massey Ferguson 135 in Carlow brought about an equally vintage result, with €111,135 being presented at the weekend to the Children’s Medical Research Foundation at Crumlin Hospital.

The Carlow to Cork Tractor Club handed over the whopping cheque to a delighted Gerry Cully of the CMRF at Jimmy D’s Pub in Bagenalstown on Saturday night.

Around €85,000 was raised from the raffle of the iconic tractor, while the remainder came from the club annual’s tractor run.

It has been a momentous year for members of the club and they celebrated in style with a parade of the tractor through the town earlier that evening led by a piper from the Killeshin Pipe Band. 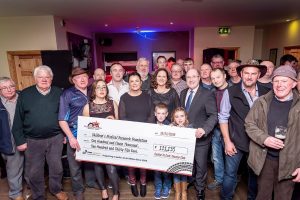 The Carlow to Cork Tractor Club presenting a cheque for 111,135 to Gerry Cully from CMRF at Jimmy Ds Pub in Bagenalstown on Saturday night Photo: James Fenlon Photography

“We are overwhelmed,” said delighted club member Brendan Byrne. “We didn’t know where it was going to stop.”

Brendan lauded club members for making the raffle the success it was.

“It was only one reason really; club members and people went out every weekend selling tickets,” he said.

Club members were selling tickets every weekend and they even travelled across the country to agri shows to do so.

Tickets were also available online, with people buying them from all over the world.

The winning ticket was also drawn on Saturday night, with the O’Shea family from Coolkenno the lucky winners. The ticket was bought at the Tullow Show and it was fittingly sold by Paul Sinnott, one of the original tractor club members.

Brendan thanked everyone who bought and sold raffle tickets and those who generously sponsored the club’s annual run.