AN elderly couple are about to have their house rebuilt because of the generosity of their community, after it was entirely gutted in a fire during the summer. Some 700 people turned out for a benefit night in Mount Wolseley Hotel, Tullow, where more than €60,000 was raised, while goods and services worth thousands of euro were donated to the cause.

Seán and Mary Kavanagh’s home, just outside Hacketstown, was completely destroyed in the fire on 12 July, leaving them without even a stick of furniture.

That devastating loss shocked their neighbours and friends so much that it spurred them into action, particularly PJ Tompkins and Jackie Moore, who spearheaded the committee.

“Imagine 700 people turning out on a Sunday night to support a cause? When I heard about the fire, I thought it would be good to give Seán and Mary a start, to help them out a bit. I’d no idea that the response would be like this. It was phenomenal,” PJ told The Nationalist. 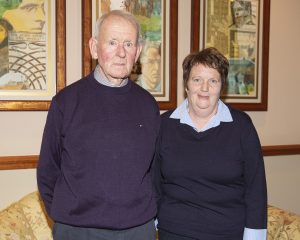 Sean and Mary Kavanagh from Hacketstown, whose home was destroyed by fire last July, pictured at their fundraising night in Mount Wolseley
Photos: Thomas Nolan Photography.

The benefit night featured musicians Shaun Cuddy, Jorum and the Tullow Youth Ukes, but it was a massive auction that kept the money flooding in. Auctioneer Michael Doyle had the function room sizzling with excitement as lot after lot went under the hammer. Indeed, there were so many donations that a separate night had to be held in Hacketstown Community Hall just to hold the raffle! It was also an opportunity for the committee to thank everyone who donated to the cause or helped out in any way.

Goodies sold at auction or items that were snapped up at the raffle included weekends away to top-class hotels, a walk-on part in Fair City, furniture, gifts and all sorts of services. In the meantime, not only has tens of thousands of euro been raised but PJ and the committee have secured the expert services of builders, plumbers, electricians, roofers, painters and labourers to actually build the house! A new kitchen has been pledged, while the whole place will be fully kitted out with furniture and fittings.

“We knocked on doors and approached people from Hacketstown, Tinahely, Baltinglass, Tullow, Knockananna, Carnew and Gorey. Everyone was so supportive,” explained PJ.

“I predicted that it would go well, but it all started gathering momentum to the point where people were ringing me, offering their services or to help out. We just need to buy the materials for them to build the actual house now. It just shows you what can be done with people power,” PJ concluded