A BENNEKERRY teenager had the opportunity to give a speech on gender equality in Brussels as part of a visit to the European Parliament.

Leah Byrne, a transition year student at St Leo’s College, joined 19 of her peers from the Ireland South constituency in the Belgian capital.

Leah had been selected as one of the winners of an essay competition organised by MEP Seán Kelly. Its title was ‘How life will be different if/when we achieve gender equality’.

As well as receiving a tour of the European Parliament and participating in workshops on gender equality and the EU’s Erasmus+ programme, the group also met incoming commissioner for trade Phil Hogan and the European Women’s Lobby. 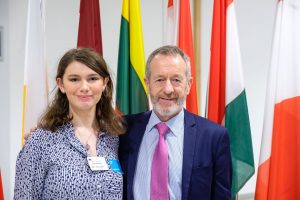 A particular highlight for the Carlow teen was a meeting with END FMG Network, a body campaigning for the end of female mutilation.

Leah had only heard of the essay competition the day it was due. She initially started a fact-laden piece before moving to personal experience of gender inequality in the farming sector and how gender stereotypes affect the acceptability of jobs.

Speaking about the three days in Brussels, Leah said: “It was great fun. Everyone was lovely, both the students and the chaperones with us.”

Leah also noted one particular difference between the Irish and European parliaments.

“I didn’t realise how respected everyone is there, particularly the Irish and the fact that everyone gets their own slot to talk and you can’t interrupt them; it’s not like the Dáil!”

“I am always glad to engage with young people on EU issues. As a former teacher, it is a great pleasure to meet young people from my constituency and the visiting students were full of enthusiasm and eager to learn.

“I was very impressed by their level of understanding and passion.”

He added: “The students presented their ideas on issues such as gender-based violence and inequalities in sport, agriculture, the workplace and politics.

“A top priority for the group was the need to end gender stereotypes and to recognise their damaging impact on women and men.”