Excitement at fever pitch as Santa turns on Christmas lights

THOUSANDS of excited children’s voices could be heard cheering on Santa as he joined Mayor of Carlow Andrea Dalton in switching on the Christmas lights last Saturday.

The event, which kick-started a month of family fun across the county, began at 1pm with young people from Carlow Regional Youth Services’ Vault Project, who decorated the stage and then performed to the growing crowd with a selection of individual and collective musical acts. They were joined by Carlow College of Music, whose choir performed a variety of magical festive numbers.

When darkness fell, the Éist Candlelight walk of Hope, supported by Bank of Ireland and led by the Carlow Pipe Band, Santa and Wibbly Wobbly Wendy, joined thousands at the Liberty Tree, who gathered for the main event. 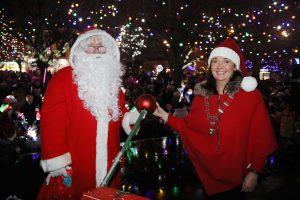 Wibbly Wobbly Wendy began the countdown to the big switch on before Santa, cllr Dalton and other elected members performed the honours to rapturous applause.

Cllr Dalton thanked everyone involved in the event and paid a special tribute to Éist founder Mary Smyth, who passed away recently.

Speaking at the event, the mayor “encouraged everybody to shop local this year, as local businesspeople make a special effort to provide a full range of goods and services for the festive season”.

Prior to Santa’s departure for the North Pole, the man himself “thanked the children of Co Carlow for coming out to help him put on the Christmas lights and encouraged them to put their letters into the special post box on Dublin Street”.

Speaking about the Festive Family Experience programme, Kieran Comerford, head of enterprise with Carlow County Council’s Local Enterprise Office said: “Carlow has really pulled out all the stops this year for the festive period, with a wide variety of activities from now until 24 December.”

For more information on County Carlow ‒ A Festive Family Experience, check out Facebook or pick up a copy of the programme in various outlets across the county.