Coffee morning in memory of Danny

THE family of a man who was cared for in Carlow hospice before he passed away earlier this year have raised €1,700 as a token of their gratitude to the staff who took care of him.

Danny Pender (66), originally from Bennekerry, passed away peacefully in July in the palliative care unit of Carlow District Hospital, surrounded by his loving family. They were so grateful for the wonderful care that Danny received in the hospital that his sisters Catherine Doody and Collette Harpur hosted a coffee morning at the family’s home place in Ardnehue. 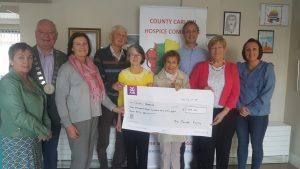 The event was so well supported by the Pender family, the community of Bennekerry and Danny’s friends that €1,700 was raised and donated to the hospice.

“The staff were so kind to him and looked after him so well. We will always appreciate the professional care that Danny received. He described his stay there as being like a hotel with the staff walking around like angels,” his family told The Nationalist.

Son of the late Dan and Kathleen Pender, Danny emigrated to Germany as a young man. He spent almost four decades there but returned to Ireland about ten years ago and settled in Delacy Abbey, Rathvilly. His neighbours in Delacy Abbely grew to love and respect him so much that they planted a tree in his honour when he passed away, while also raising €1,125 through a raffle and family fun day. The residents presented the money to the palliative care unit in his memory.