Performers bring the house down at St Leo’s talent show

THE crowd in St Leo’s College, Carlow was at fever pitch as they gathered for the annual Leo’s Got Talent show, which took place recently at the school.

The hall was buzzing with excitement as junior winners Tamara Chaves and Rosanne Ferriera took to the stage. They opened the show with their rendition of **A thousand years**, which included references to school principal Clare Ryan’s upcoming retirement.

This is Ms Ryan’s last Leo’s Got Talent as principal and undoubtedly it finished on a high note with a range of talents which were just marvelous. From jazz dancing to cello players, the audience was certainly kept entertained. 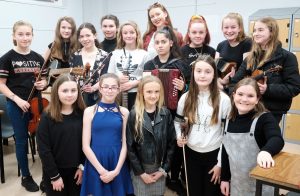 Contestants who took part in the Leo’s Got Talent competition at St Leos College, Carlow

Judges Jennifer Hennessy Schmidt and Oisín Fahy took a shine to Caoimhe Martin, who came second in the junior category, serenading the audience and playing the piano.

The school’s traditional group also entered the competition and gave a beautiful performance of Grace, sung by Emily Grufferty.

Sisters Ceara and Amy Nolan put heart and soul into their performance and were worthy runners-up in the senior category. Ending the show with a bang, Annie Bolger and Rachel Haughney blew the roof off the hall with their version of the up-tempo rock ballad Don’t stop believing. The judges were without a doubt impressed as they picked up first place in the senior category and a trophy accompanied by €100.

The night came to a close with last year’s winner Eve McGlinchey singing Peppermint Smiles, for which she received roaring applause.

MC for the night was Debbie Robinson from the school’s parents’ association, who did a brilliant job in organising the event.

A big thanks also to teachers Amy Power and Sinead Scully, who worked hard with the girls over the last few weeks to make the night such a success.