THERE is a bit of a story behind this junior hurling final success for St Mullins. At the start of the year the group came together and set a target for themselves. Their ambition was to win the junior championship. The squad was backboned by a number of players who have experienced plenty of senior success while there are others who are comfortable at this level.

“I think it doesn’t matter what you win, it is the group you are with,” said St Mullins corner-back John Murphy after the game. “When you are training with a group for a period of time, and it was [since] February for us, whether it is junior B, junior C, you are still part of that group and you want to win, whatever it is.”

His side had no real difficulty in the group stages and got to the decider with relative ease. It was apt they should be tested to the full here.

Jake Kelly converted a third-minute free for the eventual winners. Richie Whelan levelled the game from play and while Declan Murphy floated over two great points for St Mullins it was clear they were getting nothing easy.

Michael Doyle, in the St Mullins goal, was by far the busiest of the two goalkeepers and when he couldn’t effect a clearance, all it needed was the merest touch of a Bagenalstown hurley to force the ball over the line. Doyle breathed a sigh of relief when the ball was eventually cleared.

By half-time the experienced Declan Murphy had posted four points from play to help St Mullins into a 0-6 to 0-4 interval lead.

A 33rd minute free by Whelan narrowed the gap. Who knows how the momentum of the game might have changed if Mickey Walsh’s 36th-minute shot had been a few inches further to the left rather than just outside the right-hand post at the O’Hanrahan’s end of the ground? 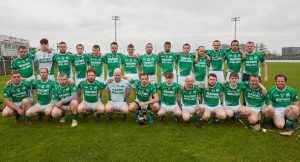 Two Jake Kelly frees for St Mullins kept his side on the front-foot. Bagenalstown created another goal chance in the third quarter when Mark McDonald got through but with the defence set to close him down, he opted to scoop the ball over the bar from close range. That brought the gap down to two points once more.

It was tough going on the wet pitch and a goal for either side was going to be huge. With two minutes to go St Mullins led by five points. Two Richie Whelan points reduced the gap to a goal. The destination of the cup hung in the balance.

With time almost up a long delivery fell perfectly for Tommy Doyle and the six-time senior winner did well to drive forward, take possession and flash the ball past the advancing Dessie Donnelly in the Bagenalstown goal.

That settled it. John Murphy paid tribute to the collective effort by the winning panel.

“Unfortunately, not every player got on the field today but for every sub, every mentor whether they were on or not, it was an unbelievable effort,” he praised.