THE Eastwood community in Bagenalstown marked the ten-year anniversary of one of their own on Saturday ‒ the late Lisa Doyle.

A group of residents organised the planting of ‘Lisa’s Tree’ along with erecting a plaque. Lisa was 24 when she was murdered in 2009. The loving and beautiful young Carlow woman was a part-time model and worked in Argos at the time of her tragic death.

Born and reared in Eastwood, Lisa is fondly remembered by locals and cherished by her family. 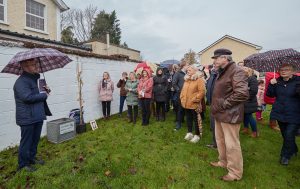 Anne Egan and Breda Johnson organised the anniversary with help from Eugene Doran. Matt D Doyle from Monumental Works, Pembroke, Carlow donated the plaque. Seán Monaghan and Paul Cleere were of great assistance, while Tracie Egan organised catering. The tree and stand were funded by the residents in Eastwood, and Fr Petru Medves performed a beautiful blessing.

Lisa’s siblings Jane, Catherine, Angela and Michael all attended the anniversary event. Despite the rain, the event brought cheers to Lisa’s family and locals.

“Talking to people, they all have their own stories to tell. The loss of Lisa was felt by the whole community,” she added.

There was a story of how Lisa, as a child, cheered up a young boy with some sweets, something he has never forgotten. Lisa would also visit and have cups of tea with the elderly, while she also gave generously to charity.

“She would say to me it’s money you’ll never miss,” recalled Angela.

Something Lisa would undoubtedly have approved of was how the Eastwood committee donated the money left over from the service to St Lazerian’s nursing home in Bagenalstown.

The Doyle family were blown away and deeply appreciative of the Eastwood community’s support.

Speaking about the tree planting, Angela said it was lovely for the family to have another place to visit and remember Lisa.