Aside from the fact that it took him six re-writes and 40 years to complete, it’s Herbie’s 116th book to be published.

Though it’s set in modern-day New York, the book is inspired by an ancient Pharaoh who ruled Egypt. Herbie originally imagined a similarly-titled ruler, but on further digging his research found that he actually existed. He wrote several versions of a book based on Nectanebo’s life, but all were rejected “because they weren’t racy enough”, according to Herbie, so he completely fictionalised it and set it in modern times. He decided that he would self-publish the work through crowd-funding, which his late, great friend Audrey Dawes spearheaded. 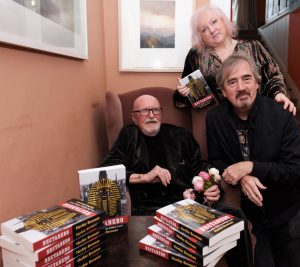 Herbie Brennan was joined by his wife Jackie and author Sebastian Barry for the launch of his book titledNectanebo at his home on Barrack Street,Tullow. Photo: michaelorourkephotography.ie

Throughout all of the rejections, he persisted in writing about Nectanebo because, he says, the character wouldn’t leave him alone, even though decades went by and the prolific writer wrote books in several genres.

Wizards, extra terrestrials, Egyptology, the occult and cats are just some of the themes and interests that he’s written about. Herbie also wrote role-playing games and books and has sold over ten-million books in 50 countries. Alongside Game of Thrones author George RR Martin, he was inducted into the Lucca Comics and Games Convention hall of fame in Tuscany.

He lives in the Old Rectory in Tullow with his wife, who is a holistic healer and therapist.

On the day that Nectanebo was launched after an incubation period of four decades, Herbie said that he was “overwhelmed” at the attention, but “relieved” that the book was done, dusted and finally unleashed into the world.