The Garryhill man, who has 16 albums under his belt and more than 20 platinum discs to his name, was accompanied to the awards by his wife Nancy and son James.

“We had a great night, especially when the host Joe Cooney from Midlands Radio told the crowd that Richie deserved a standing ovation. About 800 people there stood up and clapped Richie,” James told The Nationalist. 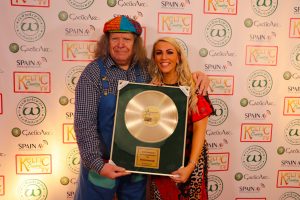 Richie first shot to fame when his single Aon Focail Eile was championed by 2FM DJ the late Gerry Ryan and it went to number one.

“Richie has won so many awards down the years, but one of the most memorable ones was the Meteor award for best single for Aon Focail Eile in 1996. He was up against The Spice Girls and Peter Andre for that!” James revealed.

The 70-year-old has suffered from ill health recently, but that didn’t stop him doing three-hour stints at the ploughing championships a couple of months ago, while he’s currently in the studio recording new material.