A THIRD book of photographs depicting Carlow town and county in bygone years looks set to be another bestseller after it was launched recently at a packed venue.

Dermot O’Brien’s Old Carlow Photos Book III created quite a stir when its launch took place in the local cathedral parish centre alongside an exhibition of more than 600 snaps for people to peer at and ponder over.

“We’d a great crowd, we were packed out,” a delighted Dermot told The Nationalist. “People love the photos; nostalgia plays a big part in it. They remember the people and places and love to see how they’ve changed.” 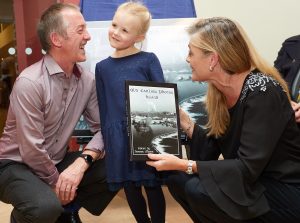 The book was launched by Mary Claire Harding Mullins, a resident of Tullow Street, who has a keen interest in local history, with barrister Cynthia Ní Mhurchú acting as MC.

A special guest of honour was 89-year-old Harry Shaw, whose own photo features in the book as well as in the exhibition. His image was captured with his pal Harry Brophy back in 1946, when they landed their first job as telegram boys.

The whole idea of the books came about when Dermot was cleaning out his attic in 2013 and came across boxes of his own photos of local scenes, sporting and social events, which hadn’t made it into his own personal albums. The realisation that people had never seen them prompted Dermot to post them on Facebook. People latched onto the photos and wanted to add their own, so a group named Old Carlow Photos was formed on Facebook and word quickly spread. That Christmas, the first book was launched, but the whole idea was so popular that it spawned an entire series of volumes. The content in the third volume has expanded and now, due to popular demand, includes images from Tullow, Bagenalstown, Hacketstown and Ardattin.

“People are now looking for the whole series of books and, at the launch, they were giving me photos that they want included in the next one! There’s been such a great reaction to it all. I’m rightly chuffed about it, to be honest,” Dermot grinned.

Old Carlow Photos Book III is priced at €25 and is available in Eason’s book shop, the Book Station, Lambert’s Newsagents, Oak View Stores and the Cathedral Parish Centre in Carlow town; Kennedy’s Pharmacy in Hacketstown; The Little Shop in Bagenalstown; and Byrne’s Today’s Local and Flynn’s Food Hall in Tullow.