AN actor from the soap opera Fair City sent out a powerful message at Carlow Shopping Centre yesterday (Monday) by supporting the upcoming domestic abuse campaign.

But rather than being mobbed by fans screaming for his attention, Rodrigo Ternevoy, who plays Cristiano in the TV show, was talking about domestic abuse and the effect that abusive relationships can have on people.
His story line in the popular soap opera right now centres around his relationship with his partner Will and how he bullies, manipulates and even beats him. Rodrigo was in Carlow yesterday to share his insights on the dynamics of abuse and to launch this year’s anti-abuse campaign, ‘16 days Opposing Domestic Abuse’. 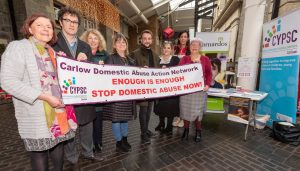 The campaign started yesterday and will run until Tuesday 10 December, with the Carlow Domestic Abuse Action Network co-ordinating events in the county.

“Groups from all over Ireland and from countries all over the world stand united during this campaign period to highlight violence against women, children and families. This is to send a strong message out to our communities that it’s not acceptable, that women and children have a right to live their lives free from violence and abuse and fear within their own homes and families,” a statement from the action network said.

A series of events is taking place from now until 10 December. The children and young people from Carlow Regional Youth Services are collecting toys and presents for women and children who use the Amber Women’s Refuge, while Tusla is holding information sessions at its offices on Athy Road, Carlow. And IT Carlow is running a competition called 16 Facts for 16 Days, while exhibitions will take place in St Catherine’s Community Services Centre, Carlow and in the Bagenalstown Family Resource Centre.