Knockbeg on top in Battle of Wits table quiz

TENSION was at fever pitch in the Seven Oaks Hotel last week as teams of TY students from Carlow competed in the Battle of the Wits table quiz run by Carlow County Library.

A triumphant Knockbeg College took home first place and will represent Carlow in the regional final. 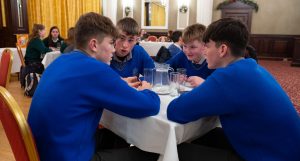 It was neck and neck at the beginning, with stiff competition between Knockbeg, Tyndall College and St Leo’s.

However, Knockbeg were on the ball and obtained a clear advantage after a perfect score in the sports round.

From then on, it was tight between Leo’s and CBS, as the neighbouring schools fought for the final spot to qualify for the next level.

Both teams were quick on the draw, but eventually, Knockbeg claimed first place and Leo’s took home second. CBS finished a close third with Tyndall College and Tullow Community School putting in a good fight.

Teams from Knockbeg and St Leo’s will contest the next round in Athlone tomorrow, Wednesday 3 December, which is sure to be another fun-filled day of battling and banter.