Bingo players protesting at Leinster House have handed in a petition in protest against a new bill.

They have gathered outside Leinster House in opposition to a proposal before the Dáil tomorrow that will see prize money cut by 50% of the fund collected by organisers, as well ensuring a quarter goes to charity.

The ‘Save Our Bingo’ campaign says halls across the country face closure if it is passed.

Minister David Stanton has said it is a fair proposal and does not accept that it will lead to the closure of bingo halls.

Liz Kavanagh plays in Crumlin, Dublin and says the bill will be damaging for people.

She said: “There would be a load of women stuck in their homes and they won’t be able to come out. It’s the only outlet they have is the bingo, all over.

“He (the Minister) is not thinking about that, they’ll end up in old folks’ homes.” 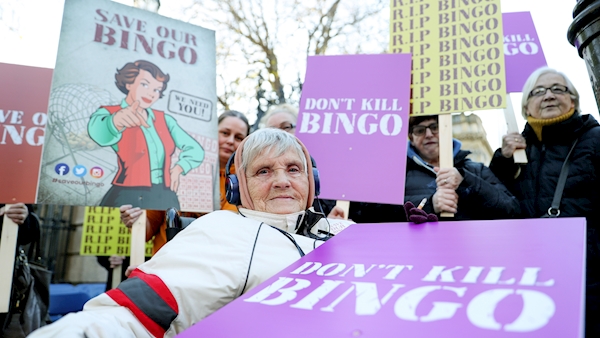 Rose Brennan from Dublin says she will have limited social opportunities if her local hall closes.

She said: “If they close the bingo down, I’m after rearing my kids I’m after doing my house so this is my outlet now.

“We’re not going to have a bingo hall so basically we have to sit in our houses and do nothing.”

Minister Stanton said: “This is a modest proposal. It will simply ensure that the charities receive a fair share from the bingo operators who act as their agent; that is a minimum of 25% of the proceeds of the bingo.

“I don’t accept that bingo halls would be forced to close as a result. It has always been the case under the 1956 Gaming and Lotteries Act that a bingo operator could act as an agent of a lottery licence holder but that licence holder must be a charitable or philanthropic cause. This is not changing.”

He added that these measures will increase transparency by placing more responsibilities on applicants for lottery licences.

He said: “It is right and proper that licence holders get an appropriate return to their charity. I am proposing that a maximum of 25% of proceeds can go to bingo operators while a minimum of 25% would go to charity and 50% would go to prize-winners.

“I don’t accept that these changes will stop anyone playing bingo – a game which is renowned for its social appeal. Given its social appeal, people do not play bingo based solely on the prize level, if they did, they would likely gamble elsewhere.

“It will simply ensure that the charitable purposes, such as sports clubs, school renovations etc. – will benefit as intended.”

With Hope in Your Heart: Seán Cox story to be published later this year