Storm Atiyah: Hundreds without power in Kerry, Cork and Limerick 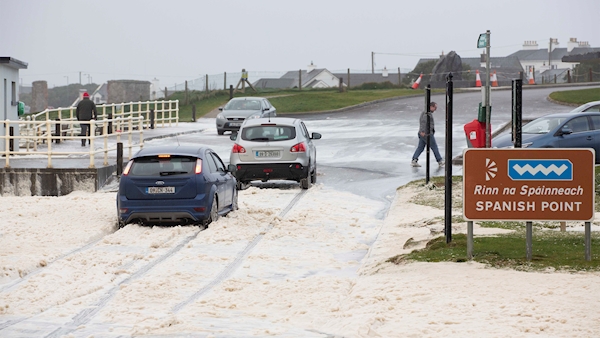 Hundreds of homes are without power in Limerick, Cork and Kerry due to electrical faults following Storm Atiyah this evening.

Some of the disruptions are:

A full set of power outages can be found via ESB’s powercheck service.

The status red warning for Kerry has ended. However, people are being warned to stay away from exposed coastal areas due to Storm Atiyah.

A status orange wind warning remains in place for Donegal, Galway, Leitrim, Mayo, Sligo, Clare, Kerry and Limerick until 6am.

“At the moment, they have a small number of trees down. There’s a lot of power down, there’s likely going to be a lot of people who are going to lose power along the west coast this evening.

“There’s some slates coming off roofs as well.”

The ESB has said the number of customers without electricity across Ireland remains relatively low.

It said some lightning in the south west of the country as well as high winds have impacted on electricity supplies.

It added that it is remaining alert and is tracking the storm, and crews are responding to outages as and when they occur.

As Storm Atiyah hits Ireland tonight, a number of flights have been cancelled, with trains experiencing delays.

The Aer Lingus flight EI 386 to Heathrow from Shannon Airport outbound at 17:25 and EI 287 inbound at 9pm are both cancelled.

A number of Aer Lingus flights from Cork airport have also been cancelled.

A number of trains will be delayed, according to Iarnrod Eireann.

As a precaution, trains will be operating at a reduced speed of 80kmph on the following lines, resulting in delays:

Meanwhile, the high levels of wind from Storm Atiyah have helped the national grid hit a record 70% renewable energy share this afternoon.

The compnay thinks that they could bring as much as 3,900 megawatts online to meet evening demand here and in the UK.

Eirgrid chief executive Mark Foley said it is an exciting moment: “We’re into record-breaking territory and you can see the day that’s in it, the winds going like crazy.

“We’re also exporting at maximum capacity across the East-West Interconnector across to the United Kingdom, so it’s a day which I think demonstrates really the power of our own natural resource which is the wind that blows across our country and what it can do for us.”

Biggest increase since May as 200 cases of Covid-19 confirmed