TWO Carlow artists featured at an exhibition in Shanghai last week, which celebrated 40 years of diplomatic relations between China and Ireland.

Work from artists Niamh Cunningham, originally from Athy Road, Carlow, and Daniel Hickey from Killeshin were part of the hugely admired China Ireland exhibition, curated for the visitor to experience cross-cultural dialogue, traversing various aspects of Irish heritage. Irish consul general Therese Healy spoke at the opening of the exhibition, where she praised Niamh and Daniel’s thought-provoking work, as well as the three other Irish artists featured in the exhibition.

China Ireland was particularly well received by the Irish disapora and the city’s vibrant artistic community.

Niamh has been living in Beijing for nine years and has been actively engaged in both local and international art projects in China over the years. “I spent five years living in Hong Kong in the late 1990s, my son Fionn was born there,” explains Niamh. 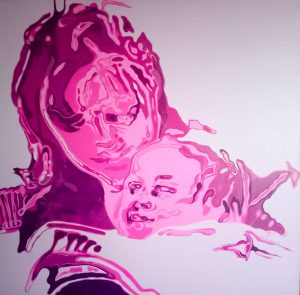 ‘In Her Eyes, acrylic on canvas’ by Niamh Cunningham

“After moving about a bit ‒ Tokyo, Dubai, Carlow, Prague ‒ we eventually came to Beijing. Beijing is many things, and after all these years it is still full of surprises. Every day is exhilarating, often frustrating, but never boring; it’s a dance in which you have to keep moving,” she adds.

Niamh described herself as really fortunate to be able to engage in various group projects around the country over the years. At the moment she is working on a sculpture project outside Leshan Sichuan with ten other artists.

“The project is a huge renovation of an old workers’ dorms area. Twenty years ago, there were 30,000 workers living in the largest workers’ dorms at the time, building a hydropower station. Now these buildings are being renovated to create an art village with five museums, hotels, hostels and studios. It’s a good opportunity for me to make work related to the environmental crisis. I have other land installations in Shandong on the same topic, which were made two years ago,” explains Niamh.

Her portraits for this recent exhibition are of students who are taught by her Irish and Chinese friends as well as artists, curators and family.

Daniel teaches senior art at Dulwich College in Beijing. “As an artist, to have the opportunity to live among, explore and discover new cultures, traditions and experience is exciting,” he says.

“I relish the opportunity to meet artists and explore new artistic influences and the cultural context in which it is formed. China is an interesting place to be at the moment and art plays a role in reflecting the thought and psyche of a people.”

“Growing up with stories of Celtic mythology provoked thoughts of the history experienced on the land in which I lived, and the endless possibilities of past lives and stories sparked my imagination.

“Later in my life I realised these stories and songs still hold sway on my identity and nationality. This is even more relevant over the years I have spent abroad, reconnecting with popular and mythical concepts, stories and songs,” says Daniel.

Some of Daniel’s work displayed at this exhibition was also showcased at his solo exhibition at the Cass Gallery in London last summer. Unsurprisingly, it was an exhibition where the two local artists met back in April this year.

“It was great to meet another Irish artist living here, but the fact that he also came from Carlow was surreal,” smiled Niamh.