MICHAEL Davitts created history on Saturday in Netwatch Cullen Park when they added an U20 A football championship to the under-19 title they won last year.

Despite the time of year, the bitterly cold weather and the low-scoring nature of the clash, both sides served up an absolutely thrilling game of football.

Mikey Bambrick laid down a marker for Davitts in the very first minute when he rifled over a point at the O’Hanrahan’s end of the ground. The eventual winners created several chances but took none of them.

On 11 minutes Sean Taylor almost found a goal. The Davitts corner-forward’s low shot along the ground was definitely goalbound, but in stepped full-back Danny Doyle with a tremendous stop for the green and blacks.

Bagenalstown lifted their game and from a point where they looked certain to settle for second best, Robbie Kane got them off the mark with a great point under pressure on 13 minutes. He followed this up with two frees as his side began to dominate. 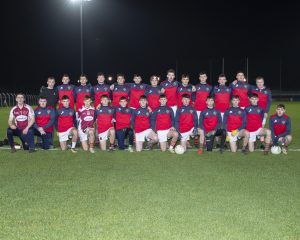 The Michael Davitts team who beat Bagenalstown Gaels in the U20 A football championship final Photo: Thomas Nolan Photography

Just before the interval a high ball into the Michael Davitts square caused problems and Kane was on hand to loft the ball over the bar. Leading 0-4 to 0-1 at the interval, the Gaels looked to be in control.

In response the eventual winners applied the early second-half pressure. Bagenalstown defended well but then Aidan Lillis curled a beautiful shot over the bar from the left and about 35 metres out. Ben Dorgan added another and Lillis converted a free to level matters on 40 minutes.

A Paddy McDonnell point looked to have settled Bagenalstown. Jack McCullough and Neil Martin also pointed. Davitts found themselves back to where they were at the start of the second period. Afterwards Davitts mentors talked about the ability of their players to retain their composure when they looked to be in trouble.

With seven minutes to go Lillis knocked over a free. Davitts sensed blood and while Bagenalstown Gaels responded they came up against a solid half-back line who gave little away.

The winning forwards fed off good quality ball. Bambrick scored his second point of the game to leave only one in it.  As the excitement mounted James Dowling levelled matters with only two minutes left.

Extra-time beckoned but Davitts were not content to settle for anything less than a win now. They drove forward and won a free. Lillis coolly converted and added another deep into injury time. Dowling’s acrobatic second point on 65 minutes ensured they wouldn’t be beaten.

In the final seconds Bagenalstown Gaels did hoist one last ball into the crowded danger area but Davitts had the bit between their teeth and were they not going to be denied their place in Carlow football history.

Note: There was an element of sadness attached to the victory and the thoughts of Michael Davitts selector Ger Kavanagh, whose son Cian played in goal, were very much with his late aunt Clare Kavanagh who passed away last January. In addition, Davitts corner back Jamie Doyle is also a grand nephew of the late Carlow legend Brendan Hayden, who died this year.