Mixed emotions after a busy year of action

SEAN Campion’s opening words to Carlow GAA County Convention on Friday evening at the Seven Oaks were positive as he looked back on the year at underage level.

“Our financial situation has improved,” he said. “Our squads go from strength to strength. I want to thank coaches, staff, mentors and parents.”

“The minors play attacking football and with a little bit of luck against Laois in the IT, they could have won that game,” he recalled.

He paid tribute to all intercounty panels and teams, their mentors, coaches and management teams which look after the players.

He changed tack and reminded delegates of the events which saw Turlough O’Brien, Steven Poacher and Brendan Murphy pick up heavy suspensions after Carlow were pipped by Down at Netwatch Cullen Park in the national football league. A draw in that game would have ensured Carlow held their status in the division.

It wasn’t the only refereeing decision which irked Carlow supporters this year and while he didn’t mention it specifically, the chairman could well have been referring to Carlow’s league match against Westmeath when Sean Murphy was fouled in front of the Westmeath posts. If a free had been awarded and converted, it would almost certainly have handed Carlow victory.

“Some of the decisions were unbelievable,” he said. He referred to the issues which arose after the Down game.

“Some refereeing decisions went against us and we lost by a point. What happened afterwards was not nice to see,” he agreed, but he said subsequent suspensions were not fair. “I believe they suffered draconian penalties.

“There were inaccuracies in the referee’s reports and we pointed this out to Croke Park to no avail,” revealed Campion. 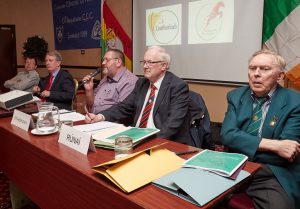 The chairman suggested the time could soon come when members of the press would no longer be free to attend county committee meetings.

The chairman said that at a recent county committee meeting it took less than half an hour to go through six items on the agenda. One of these was a proposed discussion on the introduction of the Tier 2 intercounty competition.

The chairman said he fears delegates are reluctant to comment because they are afraid they will be quoted in the paper and in other news outlets.

“The time has come to consider that the press do not attend the meetings,” he said.

“Delegates would talk more freely,” he predicted. “The issue has to be looked at going forward.”

The Carlow chairman expressed his fears that the gap between the haves and the have-nots in the GAA is getting wider.

“We have created elitism in our games,” he said. “We have a Super 8 and this is being extended.”

The chairman was critical of the decision not to select an All-Star team for the Joe McDonagh Cup in 2019 and he hinted Carlow’s expenses for making the final in 2018 were negligible.

“You wouldn’t get 15 litres of diesel for taking part in the final,” he told delegates.

He also referred to the high cost of insurance for clubs.

“Clubs and counties are being crippled by insurance. There is a complete disregard between the powers in Croke Park and the grassroots,” he suggested.

Former county board chairman Michael Meaney was praised by the man who took over from him four years ago. Recently the Old Leighlin club member announced he was stepping down as Leinster council representative which meant there was a vote for the position of Leinster council delegate.

Sean Campion expressed his thanks to the outgoing officer and pointed to the huge contribution Meaney has made to Carlow GAA. Meaney has also stepped down as chairperson of Coiste na nÓg Ceatharlach.

Campion said Meaney’s work in recent years as chairperson of Coiste na nÓg has been immense.

“He has changed Coiste around,” the chairman said, while wishing Meaney every success in the future.

With Michael Meaney stepping down as Leinster council representative after the deadline for submitting nominations to the post had expired, Michael O’Brien (Fenagh) and Vinny O’Brien (Asca) put their names forward for election. As Michael Whelan’s name was submitted before the original closing date, he was deemed to be elected and was not part of the voting process.

Vincent O’Brien polled 52 votes to Michael O’Brien’s 28 and was deemed to be elected alongside Michael Whelan.