RATHOE NS bade a fond farewell to its principal Bláthnaid McDermott at a very special Mass in the days before Christmas.

In her 14-year tenure at the helm, Bláthnaid oversaw unprecedented growth and development at Rathoe NS, enhancing the school enormously with her vision and drive.

A native of Athy, Co Kildare, Bláthnaid began her teaching career in 1982 at schools in Tullamore and subsequently a school for the deaf in Dublin, Kilkeen NS and Ballylinan NS. Interestingly, Bláthnaid also spent some time teaching in Massachusetts, USA. In January 2008, she was appointed principal of Rathoe NS.

The retirement Mass was celebrated in St Patrick’s Church, Rathoe by Fr Jim O’Connell and attended by all the pupils, the staff, the wider Rathoe community and principals from many neighbouring schools. The children contributed enormously to the Mass with their beautiful singing. The Mass was followed by presentations and speeches, with acting vice-principal Ronan Browne acting as MC. 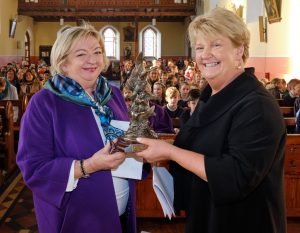 Claire Ryan (right) on behalf of the board of management of Rathoe NS makes a presentation to principal Bláthnaid McDermott during her retirement Mass in St Patricks Church, Rathoe
Photos: michaelorourkephotography.ie

Among the speakers was former deputy principal Erica Murphy, who has now been appointed to the role of principal at Scoil Phádraig, Rathoe. Erica spoke of the significant developments the school has enjoyed during Bláthnaid’s tenure, overseeing substantial building work and enhancing the education facilities that the children currently enjoy.

Clare Ryan, representing the school’s board of management, complimented Bláthnaid on her ability to work so well with all the different facets of school life and the wonderful atmosphere she created in Rathoe.

Presentations were made to Bláthnaid by the parents’ association and later that evening the staff also made a presentation at a special get-together.

The retirement Mass concluded with a wonderful poem written by MC Ronan Browne, aptly recalling Bláthnaid’s time in Rathoe and the wonderful attributes she brought to the role … in fact, the poem ran to an impressive 21 verses!

Following the formalities, refreshments were served in the local Sónas centre.

Bláthnaid thanked the pupils, staff and all in the community and will no doubt enjoy the various holidays she has planned for her retirement.